I had an email from a friend in Craven Arms in which he told me of his encounter with a Peregrine Falcon.

He had been watching the birds in his garden when they all disappeared, something flashed past him and he was aware it was grey.

A couple of days later he spotted a bird on his roof apex and took the photo below of it, it was a Peregrine Falcon, lucky him. 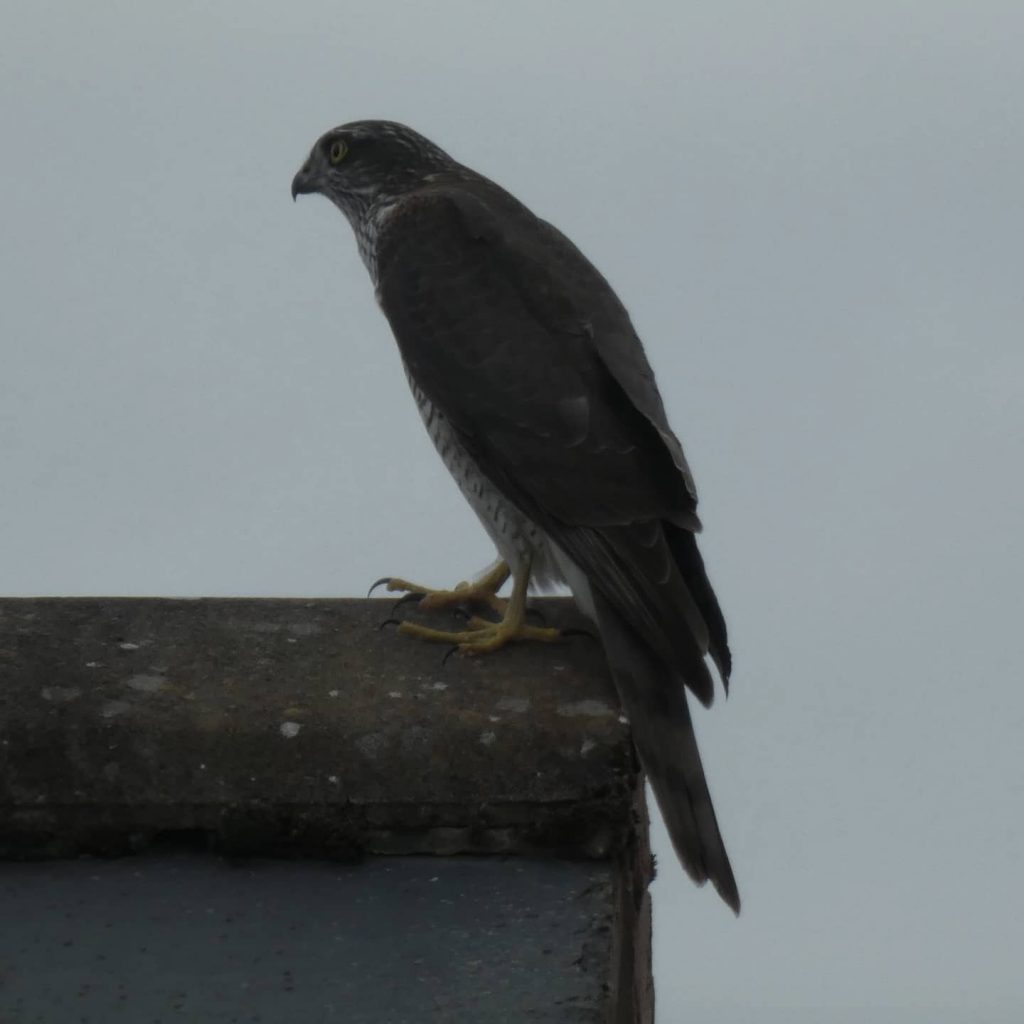 I thought I would share a few facts about Peregrine Falcons with you.

Peregrinus in Latin means ‘ to wander’. Some Peregrine Falcons do over winter in other countries on the Continent however they can be spotted in Great Britain all year round.

They are our biggest Falcon at between 40cm and 54cm in length, the female being bigger that the male. They have an impressive wing span of 102cm

Peregrine Falcons are very striking birds. Yes they are grey, which makes them sound boring but they are beautiful.

Their back and wings are a dark slate grey and are white below with black bars across their breast and belly.

They have white cheeks and throat, with a black mask round their eyes and a moustache to match.

Peregrine Falcons start breeding when they reach two years of age. They have clutches of 3 to 4 eggs which are incubated for 31 to 33 days the chicks then taking 39 to 40days to fledged.

They can be found nesting in towns and cities, using tall building instead of cliffs which would be their natural nesting place.

Peregrine Falcons can be found in most areas of Great Britain.  Judging by distribution maps the only area that does not have many is East Anglia.

Peregrine Falcons are one of the fastest birds reaching up to 200 miles per hour. They prefer to take their prey on the wing and dive down to catch their prey from great heights this is called stooping.

One of their favourite prey is pigeon, there are plenty of them round here. They also like collared doves, their numbers have only recently started increasing again.

In 1999 Peregrine Falcon were taken off the Endangered List as numbers have been steadily increasing since the banning of DDT.

The use of DDT(Dichloro-diphenyl-trichloroethane) was banned in 1984. It was used as a pesticide and resulted in the decline of Peregrine Falcons among others. It caused the thinning of egg shells which would get broken while being incubated.

Peregrine Falcons are still persecuted. Egg collectors will climb down cliffs for their eggs and they are poisoned in areas of grouse moors.

As we saw earlier they can be seen around Craven Arms and they can be spotted through out Shropshire, we have seen them at Folly View as well. Happy Bird watching.