I can remember rarely seeing Sparrowhawks when I was growing up. One place we did occasionally see them was along motorway embankments.

Sparrowhawks are now found through out the United Kingdom, even up in Shetland.

We see them regularly around Folly View and down on Onny Meadows.

Many years ago one hit a window at Orchard House. I picked it up to put it somewhere safe, out of reach of cats and dogs. It had a Sparrow in its talons.

I was later told I was lucky not to have lost a finger as they are vicious when handled. 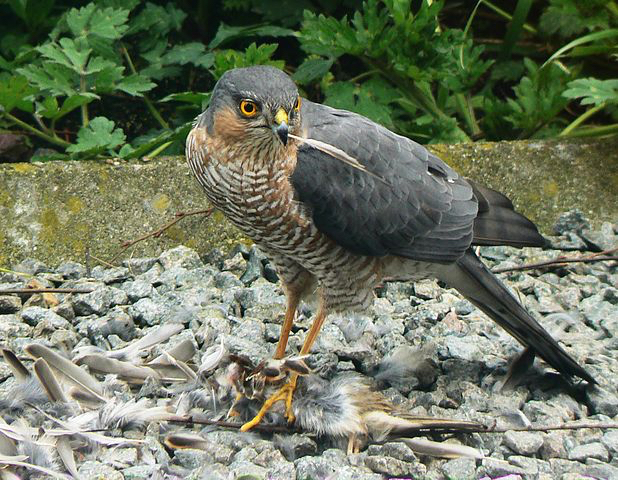 We have watched Sparrowhawks using the driveway as a bombing run, all the little birds disappear when this happens but I have learnt recently that this is what is called a rollercoaster flight which the males do to impress the females.

They are a small bird of prey. They are 28 -38 cms long with a wingspan of 55-70cms. The males weigh 110-196 grams while the females weigh 185-342grams making them significantly bigger than their male counterparts.

Their colouring is a creamy background with brown streaks and on the males they have significant amounts of grey. Sparrowhawks have yellow eyes which go darker with age turning orange to red in colour, their talons are also yellow in colour. They have a hooked Bill, good for plucking, which is pale grey with a black tip. 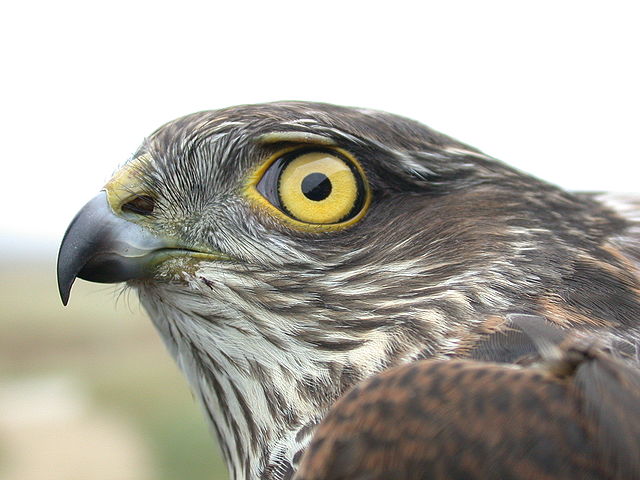 Sparrowhawks swoop on their prey and because of their small size they can get into confined spaces to chase their prey. They catch small birds and have been known to eat pigeons and bats.

The photograph of the adult male Sparrowhawk feeding on it’s prey is from Wikimedia Commons and is licensed under the Creative Commons Attribution-Share Alike 2.0 Generic license.

The photograph of the head and eye of a juvenile male Sparrowhawk is from Wikimedia Commons and is licensed under the Creative Commons Attribution-Share Alike 3.0 Unported license.