We hope you are enjoying these blogs and have good days doing some of the Things To Do suggested when you stay in Shropshire.

The George Shut and The Mutton Shut in Much Wenlock

Much Wenlock is a lovely town to walk round. There are snigets and shuts, cobbles and holy wells to find. See if you can spot the old farm yards that were in the town centre, some were still in use as farm yards when I moved back to Shropshire in 2006.

Wenlock Priory was built on the site of St Milburga’s Abbey. Entrance is 10am until 6pm up until the end of September and is for £5.70 per adult.

Much Wenlock Museum is on the High Street opposite the Square. It tells the history of Wenlock and includes the story of Dr William Penny Brookes and the Olympic Games. Admission is free.

In the Summer months the Guildhall is open to the public on Friday, Saturday, Sunday and Monday with free admission. On Saturdays there is a market underneath.

You can walk along part of the old Railway which ran between Much Wenloch and Craven Arms.

For the very energetic you could walk between the two along Wenlock Edge. I can say I have have done it from the Clock Tower in Much Wenlock Square to the Sheep Tracks Sculpture in Craven Arms. 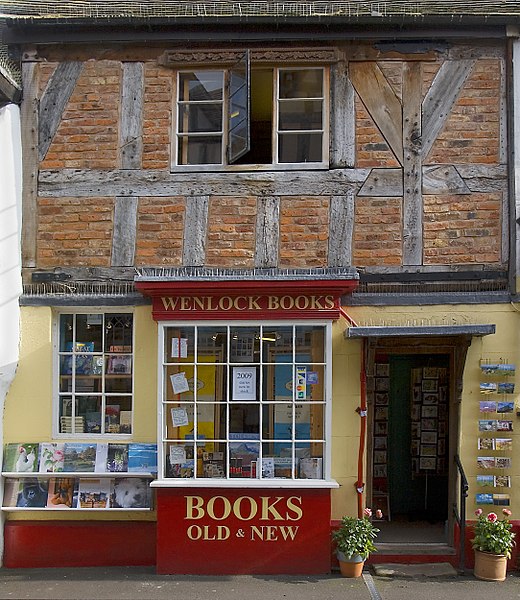 There are independent shops to explore and plenty of cafes and pubs providing refreshments.

Much Wenlock gets forgotten because of Bridgnorth and Ironbridge nearby but I have found a few Things To Do and hope you pay it a visit.

The image of the cloister garden at Wenlock Priory is from Wikimedia Commons and was taken by Tony Grist who has released this work into the public domain.

The image of the independent bookshop in Much Wenlock is from Wikipedia and is licensed under the Creative Commons Attribution-Share Alike 3.0 Unported license.