I walk every day with the dogs along the Onny River. I have over the years regularly seen Kingfishers when we have been out walking. This year I have not seen them until this recently(first week of September).

I had stopped on the bridge over the River Onny down Corvedale Road and saw a flash of blue. There it was on a branch over the running water before of it flitted up the River again . 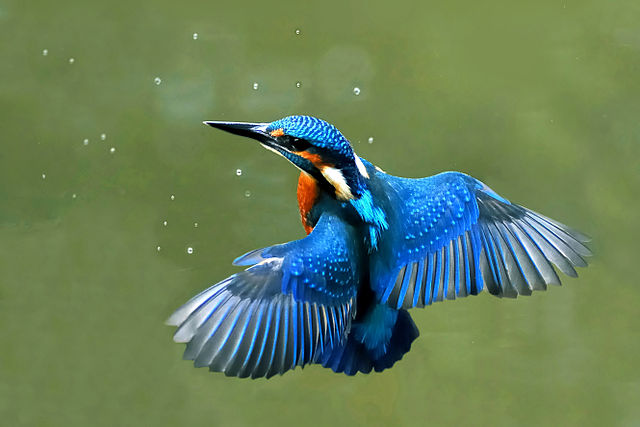 I have been lucky enough to watch a kingfisher diving several times for fish from a branch over the River Onny just past Kingfisher Corner on the Onny Meadows.

Kingfishers have a bright blue back with a copper orange breast, it is usually a flash of blue that catches the eye.

They have stout bodies, large heads, short stubby tails and long dagger like bills. The males have a black bill and the females have a orangy/red bottom Bill. Their wingspan is 25cm and they are 16cm long.

Kingfisher have no song but make a high pitched peeping sound when flying low over water.

Kingfisher nest in burrows on the river bank, which they both excavate right near the food supply. They can have between 3 and 10 white glossy eggs which they both incubate, over 19 to 21 days.

The chicks take 24 to 25 days to fledge, eating between 12 and 18 fish each per day. In years when food is scarce they can take up to 37 days to fledge.

Kingfishers couples divide their Summer territory between them in Winter. They have a territory of about a kilometre each, this can be as much as 5kilometres. They need to eat 60% of their body weight each day.

Kingfishers are very territorial and will display on branches. If they have to resort to fighting they hold their opponents beak and try to hold it under water.

Around the World there as ninety species of Kingfisher but we in Britain have one of the most beautiful.

The image used in this blog post is from Wikimedia and is used under the Creative Commons Attribution-Share Alike 3.0 Unported license.